A long-lasting season of colour, beautiful flowers that come in a whole rainbow of colours, great architectural height and easy to grow once established.  Even its names, Hollyhock or Alcea Rosea, are quite charming.

Plus you can moisturise with it,  drink the seeds and flowers as a herbal tea, and even apply it directly to skin to benefit from the healing properties.  Every part of the plant is useful, edible or both, although not necessarily palatable!  The leaves and stems, for example, are quite tough and fibrous.  But the flowers are beautiful as edible cake and fruit salad decoration, and the roots can be treated in the same way as root vegetables.

I have always loved seeing the tall spikes of flowers scattered through other summer country-cottage favourites in a garden, but I’d somehow overlooked that it is also a very useful plant.

(Lyrics from the old English song, An English Country Garden).

It is actually closely related to the Marshmallow, a plant which I know has a whole host of health benefits. So I suppose it should have been obvious that there might be a bit more to the Hollyhock than just pretty flowers! And it is one of those plants that have been being used for centuries, for its healing properties.  Back in ancient Greece, those suffering with dysentery were administered hollyhock, and it was also used to treat wounds.

The roots have proven strong anti-inflammatory properties, useful in treating skin conditions like eczema and psoriasis. It is also very soothing.  Minor burns and blisters can be treated with the bruised roots and stems of hollyhock, which aid healing, whilst easing pain and inflammation. There are so many ways to use hollyhock, and the ones I’ve included here just give a tiny taster.

I’d always thought of it as a quintessentially English plant.  But having read a little about the origins of the hollyhock, it turns out that it was originally from south-west and central Asia!  It is not something I’ve seen in Brunei, although there are trees (which I have yet to identify!) with flowers that look quite similar.  I like the feeling of reassuring continuity that something that feels so much a part of home and England, is actually also very much a part of my current home.  It’s definitely a plant that earns its place in the garden, wherever you are in the world.

I was rifling through photos looking for some good florals for a gift I’m working on, and I came across this beauty.  Verbena.  It is a flower I’ve always liked.  So graceful on their long, long stems, waving softly in the breeze.

This shot was taken in a traditional herbalist style garden in England, but before spotting it there I had not known anything about its uses.  It turns out there is a long history attached to this one, spanning a whole variety of divine and supernatural associations, as well as folklore and traditional medicine remedies.

There is also a lot of symbolism associated with the verbena flower.  The language of flowers has long been used as a subtle or secret way to convey meaning.  Some people use them to make a request for prayers or well wishes.  Verbena flowers are also symbolically used to represent healing, creativity, and happiness.   They are even used for protection against harm and evil.

Verbena has a lot of different names around the world, including Holy Herb, Herb of the Cross, Devil’s Bane.  These three possibly something to do with the belief that verbena was one of the flowers used to staunch the bleeding when Jesus was lifted down from the cross.

Ancient Egyptians called it ‘tears of Isis’, believing the verbena flower grew from the tears of the fertility goddess, Isis.  That ties in neatly with the purported galactagogic  (promoting lactation!) and emmenagogic (promoting bloodflow and bleeding!) properties attached to it in folkloric medicine.  It also makes sense of some of the other names given to verbena – Iron-Hardener, Medical Ironwort, True Ironherb and other slight variations on a similar theme.

In herbalism and folk medicine it is thought to be effective for treating a wide variety of ailments, including ear aches, arthritis pain and headaches.  As a powerful emmenagogue it can also be helpful to women suffering with their periods, but should be strictly avoided by pregnant women because of serious risk of pre-term labour.

I never fail to be amazed at the incredible properties of plants – flower power is exactly right!  There is so much more I discovered, just spending a little time searching for information.

I don’t necessarily believe everything that has been claimed, but I do find it fascinating, seeing how the perception of one little plant has evolved and grown across different times and cultures.  Now I’m wondering how many other interesting flowers I’ve appreciated for their beauty but completely under-estimated.  I might have to take another look through my archives.

Sometimes it seems that I start down certain avenues of thought completely incidentally, and then they get stuck in my subconscious.  Different angles – usually on a visual theme – twisting and turning, until my brain kicks them out to make space for something else.  Am I alone in this?!  Either way, it seems to happen quite a lot to me!

I know there is something similar with auditory materials, which is experienced by lots of people.  We’ve all been there at least once with that song that you just can’t get out of your head for love nor money, haven’t we?  I learnt recently – courtesy of the ex-pat blessing that is internet radio and the wonderful BBC Radio 4 – that these even have a proper name.  Two names in fact.  Earworms, or for those of us who think that sounds like a horrible medical condition which is best avoided, sticky music.

I know the very real psychological pain of a particularly persistent sticky song all too well.  At the moment I am rarely more than five minutes away from an outburst of ‘yes, my name is IgglePiggle, iggle piggle niggle wiggle diggle.  Yes, my name is IgglePiggle, iggle piggle niggle wiggle woooooooooo!’.  And if you don’t recognise it, then a). thank your lucky stars because it is awful, awful, awful (especially after it has been in your head for weeks at a time), and b). thank your lucky stars again, as you clearly don’t have a young child who is growing up in the ‘In the Night Garden’ toddler television generation, which is the epitome of bizarre.

Anyway, I digress….my thoughts twisting away from me, obviously!  Back to visual loops….I seem to be on a flower theme at the moment.  And bougainvillea in particular. I wrote about it just days ago (here).  And then when this latest weekly photo challenge came out, the first thing I thought of was bougainvillea.

I’ve noticed that sometimes the flower stems have a delightful twist.  Not always; I think it is a genetic mutation or deformity of some kind.  But it does create a lovely effect when it happens.  The tiny little filaments, spiralling together in the centre of their colourfully papery protective shell. Perhaps you could take the point that a slight twist in the natural order isn’t always an entirely bad thing? Certainly I think that looking at its beauty, it is hard not to admire.

So that is my contribution for this week’s ‘Twist’ photo theme.  I wonder if there is a third bougainvillea post still rattling about in there somewhere…they say that these things tend to come in threes, don’t they?! Let’s see what next week brings…. 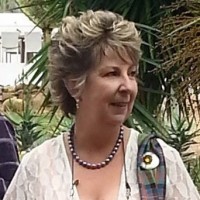 Escape Ordinary - Any day, Any time.

Reflections in, on and round about