As the sunset flared and the night sky darken around us, I watched these little guys head off for the big wide watery world out there.  R.E.M.’s hauntingly melodic Night Swimming was the inevitable soundtrack in my head.

Lankayan island, a tiny Malaysian gem way out in the blue waters of the Sulu Sea, is in what is known as the Turtle Corridor.  It is part of a wider Marine Protected Area, and is a much-needed haven for large numbers of nesting Green and Hawksbill turtles. 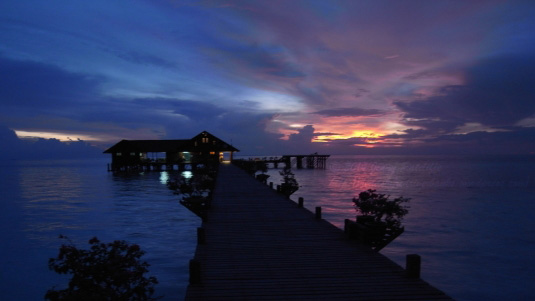 The island has a small eco-resort and a marine conservation and monitoring station, run by Reef Guardian.  One element of their awareness raising work is providing guests to the island the opportunity to ‘adopt’ a nest of turtle eggs.  Of course we were more than happy to part with a little bit of our holiday money to become turtle parents.  Even better that it meant we could put some money into turtle conservation efforts along the way!

For those hatchlings bravely hurtling towards the sea, the odds aren’t stacked in their favour, even after the protection afforded to them on Lankayan during their incubation and hatching.  Predation by big fish and sharks is the first major obstacle for these little ones.  But if they make it past that hurdle, then human factors come into play.  Risk from plastic suffocation and drowning caused by entanglement in abandoned fishing lines and nets, potential by-catch on long-line fishing trawlers, illness and death caused by chemical and oil pollution, as well as injury and fatalities caused by boat strikes. It’s a long and depressing list of the heavy toll we place on the seas, and sadly not unique to sea turtles by any means.

Hawksbill turtles don’t reach sexual maturity until around twelve years old, Green turtles are older, at more than twenty years old.  So given the threats they face, it’s no wonder that sea turtle populations worldwide are so vulnerable.  That is an awfully long time to dodge all those risks and make it to the point of contributing to the long-term survival of their species.

So that’s my entry for this week’s WordPress photo challenge; nighttime.  Let’s hope that this wave of hatchlings had a quiet night for their first encounter with the sea and night swimming, and that some of them at least get the chance to grow to adulthood.  And to finish on a lighter note:

It’s awesome, Jellyman. Little dudes are just eggs, we leave ’em on the beach to hatch, and then — koo-koo ka-choo! — they find their way back to the Big Ol’ Blue.

27 thoughts on “Sea turtles and a spot of night swimming.”

Reflections in, on and round about...with a lot of cooking on the side